At the end of April 2015 a group of students and their teachers from Escola Secundária de Oliveira do Bairro visited London to develop their English language skills and to explore British culture. Before their visit the students prepared for their visit by researching some of the famous sites in London and each day helped to plan which sites to visit. The group arrived the weekend of the London marathon and walked from the Tower of London to Westminster. As well as sightseeing they were able to see the first runners and to cheer the runners near the end of their run making their way to the finish line at Buckingham. 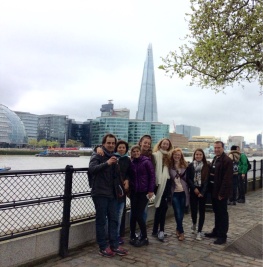 The students visited the Tower of London, saw HMS Belfast, a former Royal Navy cruiser from the 2nd World War and the Mayor of London’s famous glass building and the 87-storey Shard. They walked past the famous Shakespeare’s Globe Theatre, the Golden Hind, which circumnavigation the globe between 1577 and 1580, captained by Sir Francis Drake. After crossing the Millennium Bridge the group had a picnic lunch before visiting St Paul’s Cathedral and back to visit the Tate Modern Art Gallery. The group enjoyed learning the the nicknames of some of the new modern buildings in the city area including the ‘cheese grater, ‘the walkie talkie’ and the ‘gherkin’.

One of the highlights for the students was the see the London Eye and ‘Big Ben’ at the houses of Parliament where they watched the end of the marathon some very exhausted runners, some running in fancy dress. The group ended the day seeing Trafalgar Square before visiting China Town.

The second day started with a visit to the Natural History Museum with exhibits on animals, plants, geology, paleontology and climatology. One of the most famous exhibits is a 105-foot (32 m) long replica Diplodocus carnegii skeleton, situated within the central hall known as ‘Dippy’. The most enjoyable are the sate of-the-art interactive exhibits especially the roaring T-Rex in the dinosaur area. Then a trip to Harrods before Buckingham Palace, a walk through Hyde Park before reaching the popular Oxford Street for some souvenir shopping. In the evening the group walked along Regents Street then back to Piccadilly for dinner.